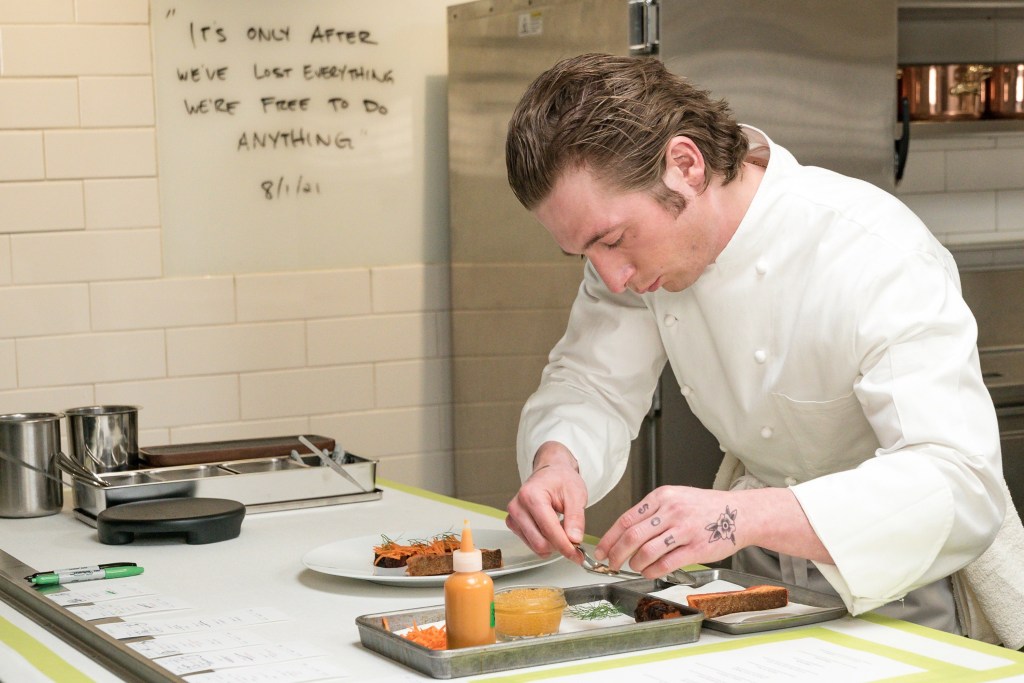 In FX’s breakout series The Bear, Jeremy Allen White plays Carmy Berzatto, a prodigious young chef who returns home to Chicago to assume control of his dead brother’s sandwich shop. It’s the role of a lifetime for White, who’s already enjoyed great success on the small screen — first as a soldier in Homecoming, and as the brainy Lip Gallagher on Shameless. Here, the Brooklyn native talks about the importance of keeping things real over a hot stove.

DEADLINE: When you were first approached about the show, did creator Christopher Storer describe it as a workplace comedy?

JEREMY ALLEN WHITE: No. Chris told me about Carmy and the idea of this young man coming home and trying to pick up the pieces of a life he’s been far away from for a long time. I read it and I thought it was really funny. But Chris’s focus, which became mine as well as Joanna Calo’s, was telling an authentic story about the food industry and the back of the house.

DEADLINE: Carmy has obviously worked in the finest of places. Why would he even want to work at a hole in the wall?

WHITE: He was totally fried from working in these fine dining spots. I think he felt a responsibility to his brother, but I also think he was angry at his brother for leaving it to him. I don’t think he came completely willingly, but I think there was a lot of guilt involved in him taking over the restaurant. He also has a lot to prove.

DEADLINE: How did you prepare for the role?

WHITE: I did a two-week crash course at Pasadena’s Institute of Culinary Education. I spent probably the most amount of time at a restaurant called Pasjoli in Santa Monica with a really wonderful chef, Dave Beran, who actually got his start in Chicago. At first, I was just a fly on the wall. I was just trying to watch the choreography of the kitchen and the line cooks. Then, we went off and shot the pilot. I didn’t know if we were picked up yet, but I really wanted to be prepared so I went back to Pasjoli, and the chef put me on the line to prepare food. It’s a very, very serious kind of place and it was the most anxious I’ve ever been.

DEADLINE: The gorgeous speech you give at the Al-Anon meeting toward the end of the first season… did you know all that information about your character going in or is that something that you just picked up over time?

WHITE: Well, it was really nice. After we’d gotten picked up I had all eight episodes to work with. So it was really, really nice. I’ve never worked that way in television. I had that speech in my back pocket throughout the whole shoot. I thought it explained so much about Carmy, his brother, the restaurant and the story — at least from Carmy’s perspective. I read it most mornings before work. I would read it if I was unsure about making a choice in a certain scene. It was kind of a North Star throughout the shoot.

DEADLINE: The New York chef played by Joel McHale. Did his behavior rub off on Carmy in terms of how he should and shouldn’t manage his own staff?

WHITE: Carmy’s aware that it’s not the way you should behave. I think that there’s a shift. I mean it’s hard for me to talk about the kitchen industry because I really don’t know much about it other than the months that I spent training before the show. But I think the kitchen industry, like so many industries right now, are really kind of shifting in terms of how people should be treated and what’s being tolerated. But I think Carmy kind of came up during a time where it was more acceptable or at least not punishable to behave like Joel McHale. So I think in episode seven you see Carmy becoming someone that his chefs were to him, coming up in New York.

DEADLINE There’s so much yelling, so much tension on this show. Does it ever get kind of ludicrous on the set? Do you guys bust out laughing?

WHITE: Ebon Moss-Bachrach [Richie] would always make me laugh, for sure. He would get so worked up and he is also just so funny and a really great improviser. There were moments where I think we all kind of lost it. There’s so much shouting and it’s so ridiculous, especially in episode seven. But it was so nice the way that we shot it, which was kind of in one take. It was like doing a little piece of theater or something, so there was no stopping. Everybody was on the same page. Everybody was in the same kind of world and everybody took it all very seriously.

DEADLINE: Why does Carmy tolerate Richie? I mean, I can’t really see what he contributes to the business other than yelling.

WHITE: Yeah, no, I don’t think he’s great for the restaurant. I think Richie would tell you something different of course. As conflicted as Richie and Carmy are and how much they butt heads, I think they’re also well aware that they are the closest things that they have to Michael [Carmy’s dead brother, played by Jon Bernthal]. For Carmy, Richie is the closest thing to Michael and vice versa. I think Carmy would have a hard time letting him go and I don’t think that Richie would go willingly, either.

DEADLINE: What kind of feedback have you received about the series?

WHITE: The reaction has been overwhelmingly positive, especially from kitchen industry people who feel seen and understood. It requires long hours, a lot of commitment, skill and repetition. That’s what we were trying to focus on, how stressful and out of control that industry can be.

DEADLINE It should be said that Carmy’s hair really is its own character on the show.

WHITE: Yeah, I was reading all kinds of books before starting the show and there’s this pretty famous picture of Marco Pierre White smoking a cigarette on the cover of his book The Devil in the Kitchen. And I was like, “Oh wow, that guy looks cool. I wonder if I can grow my hair out and try to look something like that?” And so I did. And then yeah, I don’t know, I think Carmy was kind of pulling his hair out the whole season. He was on the edge the whole time.

‘The Real Housewives Of Nairobi’: Watch Cast Reveal Of Latest Series In NBCUniversal’s Reality Franchise
Fired Stew Camille Lamb Returns in a Below Deck Shocker
Jay-Z, DJ Khaled, and More to Perform “God Did” at the 2023 Grammys
‘The Cleaning Lady’ Renewed For Season 3 At Fox; Jeannine Renshaw Joins As EP & Co-Showrunner
Future, Missy Elliott, the Roots, Glorilla, and More to Perform During 50th Anniversary of Hip-Hop Celebration at 2023 Grammys