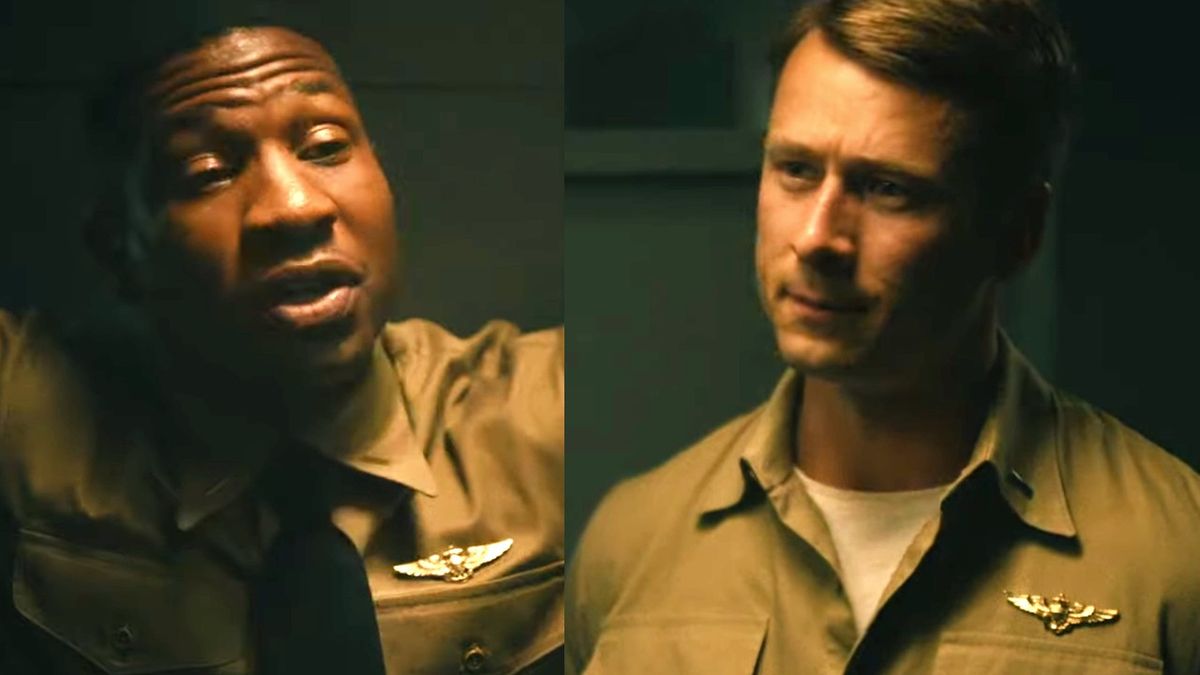 Jonathan Majors has made a strong impression in Hollywood in only a few years, tackling a variety of roles on the big and small screen (and leaving the internet feeling thirsty). He’s checking on the biopic genre box with his latest film, Devotion, which tells the story of history-making Naval fighter pilot Jesse Brown. It took some persuasion from co-star and executive producer Glen Powell for him to join, but compared to usual Hollywood deals, Powell’s pitch meeting happened in the hottest place possible. Majors finally explained what it was like when the Top Gun: Maverick star pitched him the film while naked in a Russian Turkish bathhouse.

Majors and Powell’s unique negotiating place came up while Majors was promoting the military biopic on Jimmy Kimmel Live! Host Jimmy Kimmel was thrown off after hearing about where Majors agreed to star in the film. The Kang actor was unbothered by Kimmel’s question as he broke down how Powell’s pitch meeting ended up in a New York bathhouse.

Powell was taken aback by Majors’ suggested meeting place, with the MCU star recalling his co-star saying “What?” This confusion extended to Kimmel, as he couldn’t believe the unique meeting spot. Majors understood the host’s confusion as he ran down the usual Hollywood spots where most deals go down, including the Beverly Hills Hotel and The Bungalow. The stage and film actor realized meeting in a public sauna was quite unusual, as he called the bathhouse “the hottest place in New York.” Meeting in the high-temperature location might’ve been his idea, but that didn’t stop him from referring to it as “hell.”

Making a Hollywood deal in a hot location would spell disaster for some actors, but that wasn’t the case for the MCU star. Glen Powell was more than willing to speak with Jonathan Majors in a New York bathhouse. Things worked out for The Harder They Fall star, as he recalled his friendly meeting with the Maverick breakout actor while naked.

It appeared Jonathan Majors wanted to know Glen Powell that they were equals in this project, though things didn’t start that way, as Powell showed up in his full Hangman wardrobe. Of course, Hangman didn’t stay around for long as the men disrobed before going into the sauna. Once in the steam room, the 34-year-old actor pitched the biopic to the Loki star.

Majors recalled the duo discussing Jesse Brown’s story, including his historic Naval career and his relationship with fellow pilot Tom Hudner. Upon hearing Powell’s pitch, they shook hands on the deal and stayed in the steam room for an additional period time. After striking the deal, the actors went to the New York restaurant London House, where they grabbed celebratory drinks.

Powell told his account of the bathhouse meeting when the Devotion cast was being interviewed by Variety. Much like Majors’ story, the rising star recalled pitching to his co-star in an incredibly hot sauna. He remembered his brain felt like it was cooking while trying to convince Majors to join his passion project.

Glen Powell was relieved when Jonathan Majors agreed to be in the movie despite not being on his A-game during his pitch. But who could blame him for fumbling a bit? Being in an extremely hot or cold setting would cause anyone to miss the mark a bit, but Powell did a decent job pitching the biopic as Majors is promoting it.

The Naval biopic follows the journey of Jesse Brown and Tom Hudner as they became the most decorated wingmen during the Korean War. Majors plays the history-making Brown while Powell takes on the role of Hudner. They lead a supporting cast that includes Joe Jonas, Serinda Swan and Christina Jackson.

Devotion will hit cinemas on November 23. Before seeing the aviation biopic, you can check out our 2022 movie schedule to see what new movies are coming out this fall and winter. Both actors have big projects lined up for the next few years. Jonathan Majors will star in two of 2023’s most buzzed-about upcoming films – Ant-Man and the Wasp: Quantumania and Creed 3 (and he’s looking particularly massive in the latter). Glen Powell is no slouch either, as he is currently filming Hitman with the buddy comedy Foreign Relations with Nick Jonas, as also has an untitled Russo Brothers Amazon series with Regé-Jean Page in the works.

The Unbearable Lightness of Daphne Sullivan
See Tish Cyrus & Dominic Purcell Prepare for Their First Xmas Together
Avatar: The Way of Water Featurette – Return to Pandora (2022)
After Emancipation Screened For A Star-Studded Audience (Including Dave Chappelle), Will Smith Had A Funny Take
Ashley Flowers Sets 11-City Tour For True-Crime Podcast ‘The Deck’