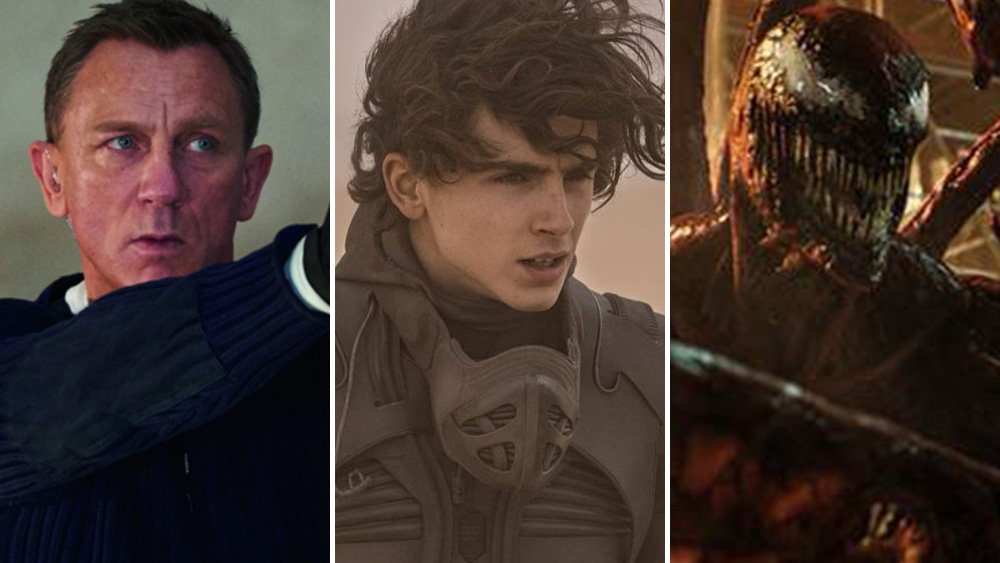 Refresh for latest…: There were milestones aplenty this weekend at the global and international box office with three Hollywood heavy-hitters reaching important new benchmarks. Among them, MGM/Eon/Universal’s No Time To Die crossed both $400M overseas and $500M worldwide while Sony’ Venom: Let There Be Carnage topped $350M globally. The weekend leader, however, was Warner Bros/Legendary’s Dune which began offshore rollout back in September and just spiced up its worldwide cume with an additional $47.4M overseas and, along with its domestic debut, easily crossed $200M global through Sunday, as we previously noted was poised to happen. IMAX also had its biggest global October opening ever with Dune, mounding $17.8M for an unprecedented 20.3% of the worldwide weekend total.

The Denis Villeneuve-directed Dune led offshore business for the session, taking an estimated $47.4M on 49,205 screens in 75 overseas markets. This lifts the running cume to $180.6M internationally, and to $220.7M worldwide. The overall holdover drop was a terrific 38%.

The top overseas market was China where Dune is the first major Hollywood release since Disney/20th Century Studios’ Free Guy back in late August. Dune has grossed an estimated RMB 140M ($21.9M) according to local ticketing platform Maoyan, though some are seeing it a skosh higher. This will shake out tomorrow, but either way is right where we saw it coming into the weekend and surpasses the lifetimes of both Villeneuve’s Arrival and Blade Runner 2049. Dune, which is handled locally by Legendary East but is also understood to be part of a single-pot deal with WB, came in second behind local propaganda pic The Battle At Lake Changjin (RMB 205.3M/$32.2M weekend). The latter has now taken an estimated RMB 5.3B ($830M), putting it within closer reach of fellow local title Hi, Mom (RMB 5.41B) to become the biggest movie of 2021 worldwide.

After jockeying a bit, Maoyan has again shifted its projection for the full run of Dune, now expecting RMB 224.8M ($35.2M). Next weekend, the film will have competition in China from No Time To Die.

Other notable performances came in the UK where Dune grossed $7.5M from 1,331 screens and is nose-to-nose with the continued run of Bond when excluding previews. Korea, which is still led by Venom 2, gave WB its second-biggest opening weekend of the pandemic, behind Tenet, with $3.4M. Mexico had a $2M No. 1 start and Brazil kicked off with $896K. Overall, Latin America overperformed compared to expectations.

Behind Dune for the studios, Venom 2 devoured $38.3M from 17,400+ screens in 53 markets this session, taking the offshore cume to $170.6M (-56% in holdovers) and global to $352.4M. This is after last session’s astounding wider release and with 50% of the international marketplace still to come. The Tom Hardy-starrer is currently on par with No Time To Die and ahead of Shang-Chi by 84%, Black Widow by 67% and F9 by 10% at the same point in release in like-for-like markets. The film captured the No. 1 spot in 31 out of 53 markets this frame.

That includes France where the start was $5.2M (with previews), besting Shang-Chi by 49% and on par with Black Widow. Germany launched with $4.3M (including previews), ahead of Shang-Chi by 90% and Black Widow by 79%. In Russia, the symbiote has grossed $30.3M to become the No. 8 Hollywood release of all time. Mexico and Korea remain standouts with respective cumes of $19.8M and $14.2M.

Meanwhile, No Time To Die handily crossed the half a billion worldwide mark this weekend, grossing an estimated $525.4M through Sunday. That makes James Bond 25 only the second Hollywood title to get to the $500M milestone since 2019 (the other being Universal’s own F9). At the international box office, 007 has topped $400M with $405.6M through today in a combined 72 Universal and MGM markets. Likewise, apart from F9, NTTD is just the second studio movie to make the four-century benchmark overseas since 2019. As noted earlier this week, NTTD on Wednesday became the No. 2 Hollywood movie globally and overseas of 2021.

The Cary Joji Fukunaga-directed installment continues to excel in Europe and Japan. Germany was the top holdover with just a 28% drop and hanging on to No. 1 despite the arrival of Venom 2. The cume there is now $56M, in line with Spectre and Skyfall at the same point of release.

The UK crossed $100M on Bond this session, seeing a 46% dip and grossing $106M through Sunday. That home market leads all play and is running in line with Spectre and Skyfall.

Hilary Duff Recalls Her Favorite Moment With A Cinderella Story Co-Star Jennifer Coolidge And The Wild Way Her Son Recreated It
Why Susan Sarandon Says She Won’t Apologize For Daughter Eva Amurri’s Upbringing Being Like A ‘Circus’
It’s Just Under 115 Days Til Fast X Finally Hits Theaters, And Ludacris Has Some Thoughts About Filming
Cancellations Of Completed Seasons Of TV Series; Experts Weigh In On Whether Trend Will Continue
Showtime Starts Removing Short-Lived Series From Its Streaming Platform