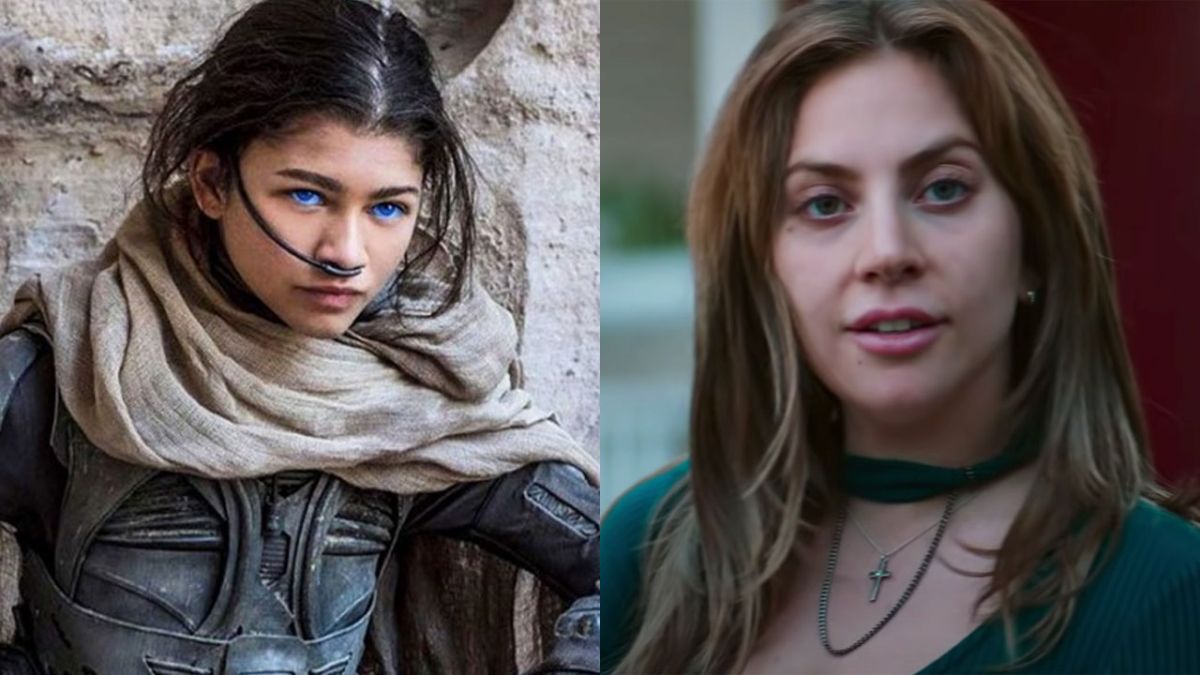 The cast of Dune has been hyping the Denis Villeneuve movie for like two years now. Filming actually took place on the film way back in 2019 with the expectation the movie would come out in 2020. Then Covid hit, and the rest has been history. It’s also meant the cast has had to continue to hype the big screen retelling of Frank Herbert’s famous novel. For Zendaya, this has meant an awful lot of talk about dance parties, and it’s totally reminding me of Lady Gaga’s famously repeated “one person” quote when A Star Is Born released.

You remember when Lady Gaga did A Star Is Born. The singer was tickled pink to get on the red carpet for awards season and she loved, loved, loved telling the story of the time no one believed in her acting ability but Bradley Cooper took a chance. Take a look, though you’ve probably heard her say it before…

Gaga saying ‘There can be 100 people in a room and 99 of them don’t believe in you but all it takes is one and it just changes your whole life…” but every time Bradley Cooper dies a little more inside… pic.twitter.com/4F3V3APbXJOctober 24, 2018

Zendaya has amusingly had a similar trajectory with Dune interviews. She’s been hyping the dance parties the cast got up to during filming since at least November of last year. At the time, she and lead Timothée Chalamet mentioned the dance parties and how Javier Bardem was involved.

“Timothee Chalamet: What was your favorite thing we did on break from shooting?Zendaya: I guess it was the dance parties that I hosted in my room.
Chalamet: There was a super legit fucking wrap party at the end there. We were with some of the cast, and then Javier [Bardem] came in and we were all dancing.
Zendaya: Javier popped in, yeah.”

A couple of months later, Zendaya was doing press on her own and appeared on The Late Show with Stephen Colbert. This time, she talked about the joys of working with Chalamet, and also included a detail about the speaker she had on set leading to the dance parties.

Next, here’s Zendaya talking to Vogue UK about exactly what it was they danced to during her short stint on set:

In fact, Zendaya and Timothée Chalamet were cover for EW recently, and also did a video roundtable in which –you guessed it — the dance parties came up again. This time she admitted she keeps Javier Bardem on her wall!

To be completely fair, each time Zendaya gives a little bit more detail to the story, so it’s much more natural than the viral Gaga story, though it reminds me very much of the A Star Is Born story and how the Internet can really amplify repetition. It’s also worth noting Zendaya was not on the set of Dune for very long. While the expectation is that her character Chani will be far more important if Dune gets it’s (also oft-touted, in this case by Denis Villeneuve) sequel, her role in the first movie is rather small, which is unexpected given how often she’s been in the press for the movie.

With this in mind, it’s not like Zendaya had a ton of time to forge working relationships with the likes of Javier Bardem, Timothée Chalamet and co, so it makes sense she only has a few stories that she’s currently able to recall from set. Couple that with the fact that casts are asked to remain spoiler-free before release, and it’s easy to see how the dance parties have probably been an easy talking point leading into release. Still cracks me up though.

The good news? Should Dune get a sequel, I’m assuming Zendaya should have a lot more to talk about the next time around. Dune hits theaters on October 22. To see what other movies are hitting theaters before the end of the year, take a look at CinemaBlend’s full movie release schedule.