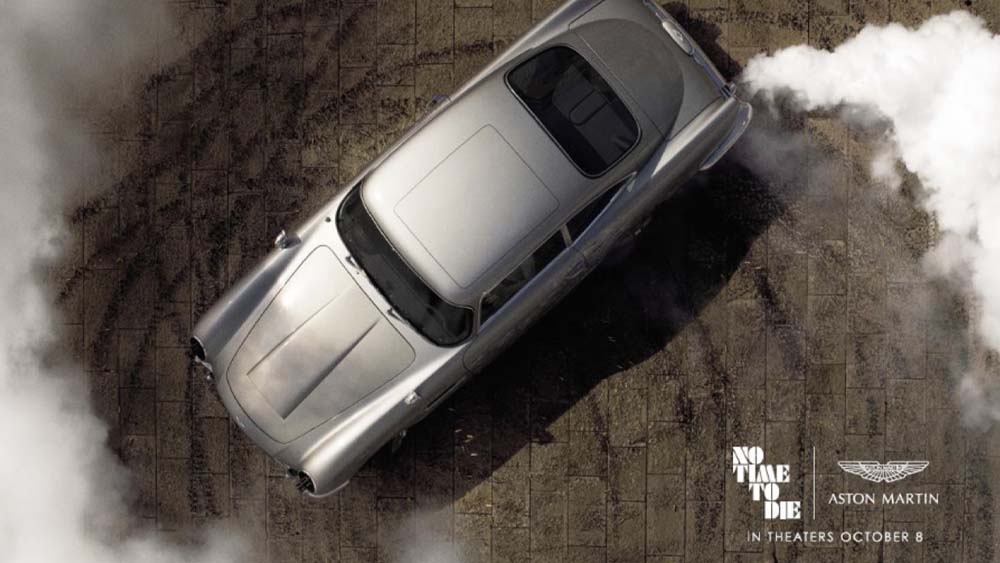 One thing is clear after we’ve endured a 19-month pandemic: The world now, more than ever, needs James Bond.

And not just movie theaters, and concession industries, but an assortment of brands from Madison Avenue which have seen sales curtailed during lockdown, in particular the auto industry which continues to see production slowed due to a chip shortage with car dealers’ new auto lots seeing inventories at 30% less their pre-pandemic numbers.

In what is one of the year’s most prolific motion picture cross-promotional campaigns valued at $150 million from over 14 brand partners is that of MGM/United Artist Releasing/Eon’s No Time to Die. While it’s not a record promo campaign for a 007 movie (that belongs to 2012’s Skyfall which repped the franchise’s 50th anniversary), it’s definitely up there and well ahead of the $120M promo brand push for 2002’s Die Another Day, the last Bond film to be strictly distributed by MGM before Sony took over the last four Daniel Craig movies. Next to some Disney/Marvel promo brand campaigns, No Time to Die is on par with Avengers: Infinity War, and ahead of Spider-Man: Homecoming ($140M) and  Guardians of the Galaxy, Vol. 2 ($80M), but behind Avengers: Endgame‘s pre-pandemic $200M partner cross promotion.

No Time to Die struts what is a traditional Bond line-up of uber-luxurious products including Aston Martin cars, Omega watches, Smirnoff vodka, Chopard jewelry, and Michael Kors which jibe with the spy’s haute sensibility. Bond’s taste for the finest goes all the way back to Ian Fleming’s original 14 novels and short stories which referenced real world products and brands like Gordon’s Gin, Smirnoff Vodka, Bentley motorcars, Taittinger champagne and Rolex watches name-checked throughout the pages. These brands fleshed out the world Fleming was creating, so that it was more believable to his readers. When Fleming was accused of including brand names for the purpose of receiving compensation, he retorted, as quoted in Andrew Lycett’s biography of the author: “My books are spattered with branded products of one sort of another as I think it is stupid to invent names for products which are household words”. The only time any company sent anything to Fleming in response to being included in his books was Floris, who sent him some soap.

However, this promo campaign for Bond is quite special, standing the test of time throughout the pandemic, as No Time to Die endured four release date changes. It speaks to Eon and MGM’s finesse in keeping their partnerships intact, and the advertisers’ patience and class in waiting for the 25th Bond. That’s a testament to the 007 franchise’s power, not to mention its ability to yield sales for fellow advertisers.

“It’s been great that these brands have really stuck with us through all these multiple movies,” MGM Chief Marketing Officer Stephen Bruno tells Deadline.

And there’s a factor about 007 which Amazon, which is in the process of buying MGM, should keep note of: Bond on the big screen makes the world go round, and raises advertisers’ profiles. It’s a very valuable piece of IP which the shopping site should be keen not to marginalize as some day-and-date title. Few streamers can boast of having a massive triple hundred million budget promo partner campaign associated with their movies or TV shows. While Amazon has embraced largely a hybrid theatrical day-and-date streaming release distribution model of late (with unreported box office grosses), they’d be wise to let MGM do what they do best when they’re brought into the fold: Make and release great theatrical movies on window, in particular Bond.

Bond producer Barbara Broccoli, who together with her half brother Michael Wilson also oversees the feature IP and is heavily involved in the promo partner selection told Sky in the UK back in September that “[Amazon] certainly have told us that the films will be theatrical films in the future. And we’ll see what happens.”

“It’s a team partnership with both companies forever linked to 007,” says Bruno about MGM and Eon’s collaboration on assembling the platinum brand line-up.

“Eon puts in excellent amounts of work to make these partnerships come to life. Because of the franchise’s history of great partnerships, it’s a very sought-after relationship. The negotiations with MGM, Eon, and these promotional partners start years in advance. The partners have to make sense, and the brands have to help each other. They have to be brand appropriate for both sides, and as a result of that curation there’s been a lot of success,” the executive adds.

Because of the multiple release date changes for Bond, some brands’ campaigns had no choice but to go sooner than expected well before No Time to Die‘s current Oct. 1 UK and Oct. 8 opening dates, i.e. Omega watches, the Defender Land Rover, The Nokia XR20 and a Heineken commercial which was already in the can with Daniel Craig. The actor returned to do an updated reshoot, which is now running, with the tagline “Well worth the wait.”

Other studios with delayed event films saw similar situations with their brand campaigns: Wonder Woman 1984‘s Doritos bags became available in grocery stores during the summer 2020, well before there was any concrete plan for the pic’s theatrical opening, ditto for Top Gun: Maverick Matchbox airplane toy sets, and Minions: The Rise of Gru action figures on Walmart shelves; those two pics not even dated to open until 2022.

For No Time to Die, those returning promotional partners are:

Aston Martin. It’s the 13th time that Bond has driven the sleek auto, which began onscreen in 1964’s Goldfinger when he had the DB5 in his hands. No Time to Die’s campaign focuses on four models including the DB5, V8 Vantage, DBS Superleggera and the Valhalla. There was a Formula 1 activation, print and social campaign, dealership promos and commercials. The British carmaker sold 3,8 cars in 2012, the year of Skyfall‘s release and 3,6K cars in 2015, the year of Spectre‘s release.

While most tentpole brand campaigns are fortunate enough to have one auto partner, Bond has a total of three including Jaguar and Land Rover (which are one company). This isn’t uncommon for a 007 movie, in which automakers, such as Ford with Die Another Day shelled out $35M to replace BMW as Bond’s official auto supplier.

While Aston’s DB5 makes a cameo in the pic’s early Italian villa chase scene, there’s the Land Rover Defender which he drives with Lea Seydoux’s Madeleine and her daughter in chase scene from villain Lyutsifer Safin’s (Rami Malek) men. Land Rover launched a Limited Edition 007 Defender with a creative campaign featuring action scenes and stunts from the film; along with social, digital and dealership pushes.

“This speaks to the true global power of the James Bond brand,” says Bruno about the movie’s three auto partners. “All of the vehicle brands were happy to be together. They each have their own role in the movie, you and it doesn’t feel like they step on each other. “

Land Rover’s Defender spot from February with over 3M on YouTube:

Other legacy partners include Bollinger champagne which is selling a special cuvée in a limited edition 007 gift pack, Coca-Cola which has a continued partnership with 007. Coke Zero was launched in 2008 with Quantum of Solace and then again with Skyfall in 2012. The soft drink will continue with an enhanced in-cinema activation across Europe & Australia.

Omega‘s campaign celebrated 25 year’s of the watch’s time with Bond, working with Craig, Naomie Harris and Lashana Lynch as key ambassadors for their brand in TV, print, boutique windows in 32 Omega locations and signage at 196 retail locations. The Omega spot on YouTube has clocked close to 29M views in four weeks, substantially more than any other brand’s video.

Smirnoff, touting its No. 21, celebrates being the original vodka used to make Bond’s martini in his feature debut Dr. No. Their slogan this time around: “There’s a Spy in Everyone”.

New partner highlights include Adidas as Eon and MGM look to hook a younger demo which designed an array of No Time to Die UltraBoost running shoes in both men’s and women’s sports apparel. This includes the UltraBoost DNA White Tuxedo – a sneaker with a white base, James Bond motif on the tongue and finished with the iconic 007 insignia. There’s also the UltraBoost20 Black Tuxedo, a running shoe that features responsive cushioning and a graphic on the sockliner pulled straight from the backdrop of Bond’s action scene set in Cuba. The UltraBoost 20 Q Branch which has a hidden pocket in the lace-cage of the shoe and the UltraBoost 20 No Time to Die Villain, inspired by Malek’s Safin which features a rough concrete design, a lace cage that mimics the bad guy’s porcelain mask and a sockliner imprinted with details straight from his bunker. Adidas’ TPU Boost is known for delivering incredible energy in very step, and superior cushioning and durability in all conditions.

DHL‘s campaign was the production’s shipping partner. Says Bruno, “They helped make the movie and deliver the actual logistics to getting the movie made including moving all the sets and vehicles around the world. They also went deep on their promotion and shot a bespoke ad, which was really fun, ‘License to Deliver’ and they’ve had branded vehicles in the US and abroad.”

Triumph had their Tiger 900 and Scrambler 1200 motorcycles to sell, both of which starred in No Time to Die. The Triumph limited edition licensed 007 motorcycle sold out stateside in just 47 seconds, we’re informed. Their BTS spot:

Swatch had a campaign which focused on the launch of their special edition watch, inspired by and worn by Ben Whishaw’s Q. There were marketactivations in China, France, Germany, Hong Kong, Italy, Japan, Korea, Malaysia, Mexico, Russia, Singapore, Spain, Switzerland, Thailand, Turkey, and UK.

Already, this cushy product lineup is seeing fruits, driving the 25th Bond film to a $121M foreign box office opening last weekend and at least another $150M+ at the global box office. United Artist Releasing held fan screenings last night in the U.S. and Canada, which continue tonight before becoming the widest opening 007 title ever at 4,407 theaters.

What’s clear for luxury brands, now and forever: there’s never a time for Bond to die.