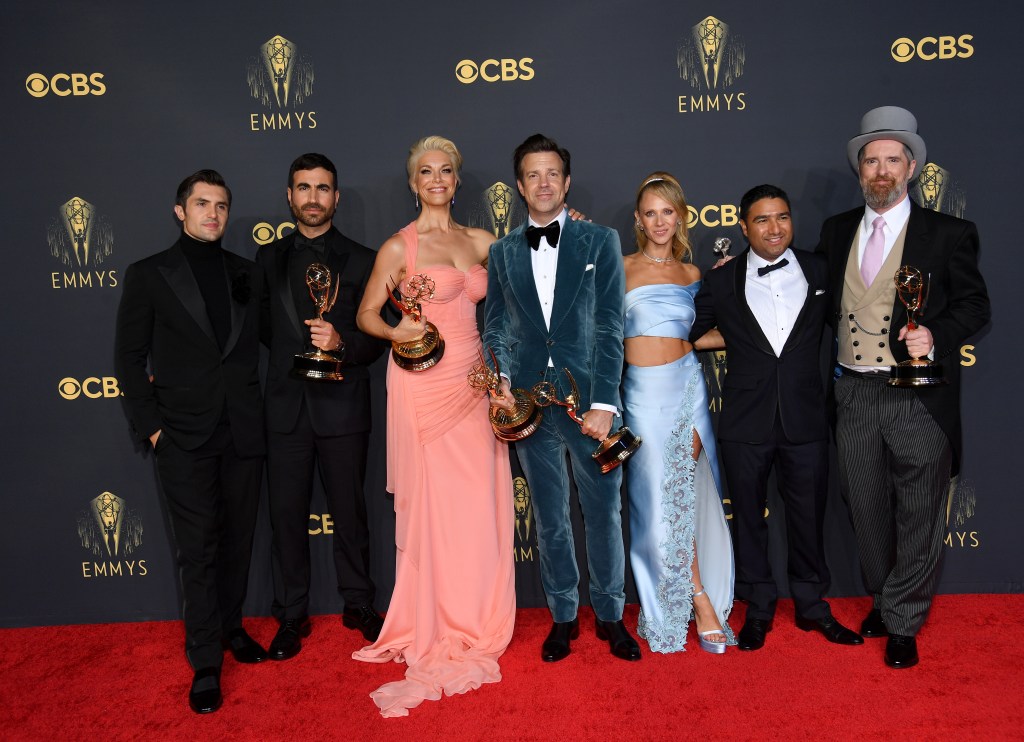 With a huge challenge in trying to stage a live awards show while still in the shadow of Covid, the Emmys pulled off a mostly entertaining three hours and fifteen minutes, even if (save for a couple of surprise wins) it was all a pretty predictable outcome. Most pundits (including me) were forecasting wins of Ted Lasso for Comedy, The Crown for Drama, and The Queen’s Gambit for Limited Series despite stiff competition. The British invasion also seemed inevitable, taking us back to a time when Emmy seemed to devour everything from across the pond.

That is how it all turned out with The Queen’s Gambit and The Crown( holding its coronation in London), both taking 11 wins overall each, a truly impressive haul for Netflix which is no longer snakebit at the Emmys finally getting some crowning glory that has eluded them. They are tied now for the all time Emmy winning hand, ironically with CBS which also notched 44 wins in 1974 – ironic since this rout took place tonight on, you guessed it, CBS which in the sad state of network affairs won nothing on their primetime show this evening. Only NBC with Saturday Night Live (which counting in last weekend’s 7 Creative Arts wins took 8 overall ) racking up another win for Variety Sketch Series kept the Emmy broadcast from being a complete washout for the four broadcast networks who once exclusively ruled this roost, and certainly did the last time the Emmy show was held as a banquet rather than in a 6000 seat theatre. And kudos to Apple TV+ which with Ted Lasso took 7 overall wins to really be a huge boost for the young streamer. Between Netflix’s Sarandos and Apple’s Lasso it was a big night for anyone named Ted ( a Netflix source handed me that line).

In fact it was just an overwhelming evening for streaming services, and that includes perrenial Emmy leader HBO whose new HBO Max came roaring out of the gate with the terrific late breaking Hacks to take Lead Actress in a Comedy Series for Jean Smart, as well as writing (I voted for it) and directing Comedy Series awards, somewhat dampening the expected coronation for Lasso which still really impressed. Amazon and Hulu which previously had beaten Netflix for bragging honors at the Emmys by being the first streamers to grab Drama and Comedy series Emmys (Handmaid’s Tale for Hulu, and Mrs. Maisel and Fleabag for Amazon) weren’t a factor this evening. In fact season four of Handmaid’s Tale got skunked, going zero for 21 nominations. Ouch.

Still the only streamer that truly flopped Emmy-wise was CBS’ decision to simulcast the show on their nascent sister streamer, Paramount+ which at least in my experience trying to watch it (while also having another TV tuned to CBS) was miserable as it started buffering right from the start, sending me back to reboot it, and then falling well behind CBS’s broadcast rather than being a match for the live presentation. As I noted in our live blog if Shari Redstone is determined to gut a great motion picture studio for the sake of creating a successful streaming service they better get their act together.  I signed up for it this morning for $9.99 (or something like that) monthly just in time  for the Emmys (our DirecTV was out in the living room)  and wound up turning if off after 20 minutes and reverting to my small office TV to watch the show on the network.

Even if the ultimate outcome for major winners was pre-ordained, the way the program was structured created quite a bit of suspense along the way, especially with those HBO wins for both Mare Of Easttown and Hacks, as well as that writing award for Michaela Coel with I May Destroy You. Regarding the latter she came in with four personal nominations for her acclaimed limited series but got just that consolation prize from the writers branch (full disclosure: I am a voting member of the TV Academy and in that branch). The sweep of caucasian winners in acting categories tonight has already led some to post #EmmysSoWhite  hashtags as not a single Black, Asian, Latino or underrepresented group was among the winners. With I May Destroy You, The Underground Railroad, Lovecraft Country, black’ish, and more chalking up numerous nominations it looked from the day of those announcements this could be a big year for diversity, but although women scored well with directing wins, and Coel with that writing nod, this was not borne out in actual wins.

Perhaps however the #EmmysSoWhite moniker is a little unfair though since at last week’s Creative Arts ceremonies three of the four Guest Acting winners were people of color including Courtney B. Vance, Dave Chappelle and Maya Rudolph, so the same actors branch that rewarded the white cast members of The Crown, Ted Lasso, and Mare Of Easttown are also the same ones who honored those guest performers. Disney +’s Hamilton turned out to be the most diverse winner tonight, but that was shot five years ago and its Emmy win for pre-recorded Variety special seemed anti-climactic to say the least. I would bet a lot of those who checked off their ballot for it probably did so from seeing the stage production, not the filmed version of it. Like so many Emmy winners Hamilton excelled because it had name value. It wasn’t even originally shot with the idea of even being premiered on television, but rather movie screens instead.

In terms of winning Emmys it probably matters more if you are in “the club” and can chalk up wins in multiple years like Chappelle and Rudolph who joined John Oliver winning his sixth year in a row (please, enough already) for a weekly show against those produced daily by other talk hosts, and RuPaul adding to his Emmy totals in the Competition categories. Some of this is just lazy voting. The same voters pick the same shows until they burn out (the shows, not the voters). It is an Emmy tradition, but the Academy really blew it by not giving Conan an Emmy for his final season. C’mon guys. I voted for Conan genuinely thinking it was his year, but it wasn’t. Even Oliver and Jimmy Kimmel were both publicly rooting for the guy. At least Conan got the last laugh(s) by hogging the spotlight on the show which, while nicely MC’d by Cedric The Entertainer, also had a few deadweight comedy bits, the exception though being the 12 step session for perennial Emmy losers which I thought was a pretty funny idea (considering the number of perennial losers in the audience tonight who continued their losing streaks)  and well executed by the likes of Jason Alexander and Fred Savage.

This is all not to say the Emmys are devoid of new blood. The Limited Series categories have become easily the most prestigious and important for the Emmys (witness the Queen’s Gambit win saved for last). There were so many good ones this year it seems unfortunate they stick to only five nominees. That needs to be expanded as was done with both Comedy and Drama series. And it is heartening to see perhaps a trend away from endless repeat winners in those comedy and drama categories.  Ted Lasso, follows Marvelous Mrs. Maisel, Flea, and Schitt’s Creek  as there are now four shows in a row winning it for the first time. The Crown follows Succession and Handmaid’s Tale also as first time winners in a similar streak in Drama Series, a trend there broken up there only by the repeat win of Game Of Thrones.  It would be wise for Emmy voters to keep an eye out for freshmen as it helps soften the show’s other tendencies to repeat its favorites too often.

Many commenters to our live blog noted the tsunami of streamer wins as disappointing because they simply can’t afford to keep adding every new one that comes along, and feel left out of what all the excitement is about. That too can be a big problem going forward as the Emmys, in order to survive, need to have an even bigger tent than the one where the show was held tonight, and not just a showcase for streamers. The end result of that might be the networks finally just banishing it to the streamers. Well, maybe not you Paramount+.