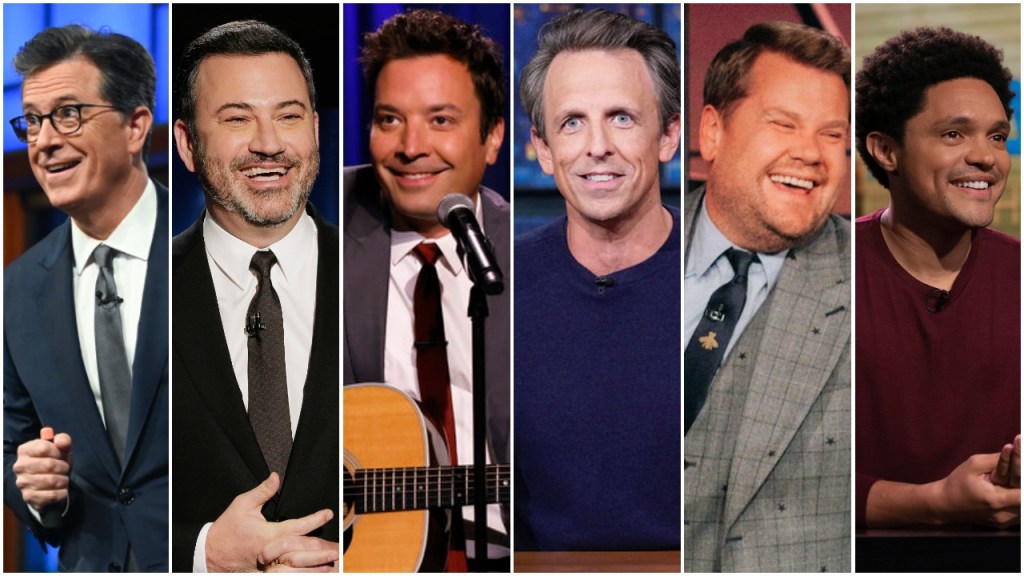 Stephen Colbert bounded on to the stage of The Late Show on September 7 with a new look. The comedian was rocking a new moustache as well as a rejuvenated energy.

Colbert said it was “lovely to be back” and joked that exec producer Chris Licht thought his new facial hair would lose him viewers. A year ago, Licht’s voice would have been one of the only sounds audible, but this time, his reply somewhat drowned out by the raucous noise of a live studio audience in the Ed Sullivan Theater.

The host has been back in front of a crowd since June 14 and it has undoubtedly had a positive impact on the show, as it has done for The Tonight Show Starring Jimmy Fallon and Jimmy Kimmel Live!

“There’s a rejuvenated sense of purpose,” Licht tells Deadline. “You can see it with all of the shows, there’s been a turning point. We’ve taken a bit of the wandering through the wilderness out of the equation and now each show can get back to what they do well. You didn’t have that last year because of all of uncertainty with the pandemic so it does feel a little more like a traditional return.”

Licht says that he’s been “blown away” by the effort of the team on the show, which also recently debuted a brand-new opening credit scene. He admits that there are still challenges, particularly surrounding the health and safety protocols and the expense that comes therewith, but that the staff has also discovered a newfound nimbleness to production.

“Overall, the show’s energy is back and we’re focused less on those ancillary things and more on the core mission of entertaining, which is all anyone wants to do,” he adds.

Both The Late Show and The Tonight Show were off and on across July, August and the start of September.

Jamie Granet-Bederman, co-showrunner of the latter, says there’s a feeling of being back now. “Late-night is the type of thing that you have to be on for a long time to get your groove so when we came back on September 7, everybody was ready to go,” she tells Deadline.

She highlights the fact that kids went back to school, and New York has been buzzing with events such as the Met Gala, the MTV VMAs and Broadway’s return. “There was definitely a freshness, an excitement and an energy,” she adds.

The Tonight Show has also had a live studio audience in 30 Rock since the start of June. Granet-Bederman says it’s “possibly the most exciting feeling ever”. “It was incredible. Jimmy really felt it and he’s so appreciative. You can tell when a joke lands or bombs,” she adds.

Guests are also back in the studio and similarly appreciative of a live audience. Vin Diesel, for instance, was visibly moved by the audience reaction when he was on the show to promote F9 and he and Fallon unexpectedly went into the crowd to show their appreciation. “It was quite nice, he got very emotional about it,” she adds.

Late-night shows have had to deal with celeb interviews on Zoom for much of the past 18 months so to get them back in the studio allows them to play more games and do more segments. For instance, Trevor Noah was on The Tonight Show and they came up with a rather silly game called First Try. “It feels that when people come on, they’re actually really happy to be here. Doing the press junkets, it was probably just another thing on their to-do lists, but everyone that’s been here is joyful and seem excited about it and they’re excited to get out on stage,” Granet-Bederman says.

Jimmy Kimmel Live! is also back with an in-person audience, as Friends star Jennifer Aniston discovered when a number of super-fans with Aniston-inspired tattoos turned up in the El Capitan Entertainment Center.

However, the LA-shot show isn’t back to a full audience just yet. Kimmel, who once again took the summer off with the show peppered with guest hosts, returned on September 7. “When I left, I assumed things would be back to normal when I got back. I thought we’d have full audience with no masks. I was ready to get back to French kissing the guests and yet here we are masks, half an audience. I leave you people alone for two months – you start taking horse worm medicine,” he joked on his first show back, fresh with a new chandelier.

Kimmel, who said that some people thought he was dead, in rehab or recovering from Covid as a result of his contractual summer vacation, also recently addressed his late-night future. His contract is up next year and he told Howard Stern this week that he vacillates as to whether he will sign up again.

Another host who is making a similar decision is James Corden, who Deadline revealed this week was in contract talks with CBS to extend his run on The Late Late Show.

Corden, who took all of July and most of August off, is evidently, glad to be back, riffing with his colleagues at the top of the show and forcing CBS late-night chief Nick Bernstein to ride a prop horse dressed as a jockey.

Exec producer Rob Crabbe says the way they’re making the show has brought the crew and staff a bit closer. “James is having a lot of fun doing it, we’re having a lot of fun making it. There’s a looseness that we weren’t able to pursue before that the audience would tolerate,” he tells Deadline. “We’re definitely in it now, there’s a back to school vibe. Summer’s over, and we’ve put our heads down and got back to work. You now try and get back into a groove.”

The Late Late Show is known for his centrepieces such as Crosswalk The Musical and Carpool Karaoke. The show had its first automobile singing in some time earlier this month with Camila Cabello, Billy Porter and Idina Menzel. It was the show’s first Carpool, other than the cast of Friends singing “I’ll Be There For You in June,” since March 12, 2020.

“We’ve always been a big pop variety show and a lot of those elements fell by the wayside during the pandemic but we’re now starting to get our legs under us and be able to carefully shoot the things we want to shoot,” Crabbe says. “It was nice to put some people back in the car.”

The plan is now to get out and shoot more outside. “We can definitely do more [now] because we’ve figured out how to shoot safely. The whole thing has been a learning process for everybody. That’s allowed us to reignite the field team to get out there,” he says. “We’re always trying to come up with new ideas and things to shoot. As everyone comes out of this dark place and the world opens up a bit more, I think there’s going to be a lot more opportunity.”

The Late Late Show flipped its set around when Corden and the crew returned to the studio last year to make it more intimate. They have now flipped it back, in anticipation of a studio audience, but have built a wall for now to keep that closeness. He says that they’re having that conversation now as to when they will bring back a crowd. “We’ve put ourselves in a position where we can flip the switch when it’s time to have an audience back but we haven’t nailed it down exactly,” he adds.

The CBS series is also bringing back guests, in pairs, with the likes of Gillian Anderson and Cedric The Entertainer appearing together and Nine Perfect Strangers’ Nicole Kidman and Melissa McCarthy coming on next week together to return it to its “salon” feel.

Timeslot rival Late Night with Seth Meyers is also bringing back an audience in October, as revealed by Deadline this week.

Exec producer Mike Shoemaker says the challenge will be melding the voice of the show as it has focused on the home audience for the last 18 months with a crowd. “You don’t want to turn your back on the people who carried you for the year and a half, which was the home audience. There’s a relationship, so the challenge is to bring the studio audience into it but not lose that audience,” he says. “It’ll be really fun the first time that Seth does a joke and it doesn’t work and he’ll say ‘Oh, yeah, you guys’. That’s when you’ll hear me laugh the hardest, because nothing makes me laugh as much as when something goes wrong.”

Late Night has also had an increasing number of in-studio guests. One, Meyers’ friend and former Late Night writer John Mulaney, nearly broke the internet earlier this month with a frank conversation about his addiction issues and announced he was having a baby with new girlfriend Olivia Munn. “You were really watching two friends discussing things that you don’t usually get to hear them discuss. It was real and was nice people got to see such a raw conversation about addiction and recovery,” says Shoemaker.

He adds that he’s looking forward to a decent run, having spent the summer on and off screens and agrees that late-night is in a really positive place right now. “You can get some momentum,” he says. “We also work in America’s Christmas building. The tourists are back, Broadway is back, you feel the fall is an anticipation of that, it ticks us over. We really feel it here.”

The Daily Show also has a new energy, thanks to its move from Trevor Noah’s apartment to a new studio in Times Square.

Noah joked on his first show back on September 13, after a summer break, “I would have kept doing the show from my apartment but I started to have problems with the wi-fi so I decided building an entirely new studio was easier than calling Spectrum.”

Showrunner Jen Flanz tells Deadline that it’s a great feeling. “Starting the next chapter of The Daily Show has given us all some juice. Also, getting out of our apartments after a year and a half is reinvigorating.”

She joked that she’d forgotten how cold studios are. “It’s so cold that I’m kinda of happy I’m wearing a mask, I’m considering layers.”

As the fall season kicks in and the late-night teams wonder whether Conan can prevent Last Week Tonight from picking up its sixth straight Emmy win this weekend, there is a beautiful optimism in the air across the genre.

The Late Show’s Licht says, “I’m very optimistic and I think you’re seeing that on the screen. I think all of my peers feel the same. Let’s get back to business.”

“Everyone’s excited to be back and have a bit of road in front of us,” agrees The Late Late Show’s Crabbe.

Television’s Tom Verlaine Dies at 73
Infinity Pool Exclusive Movie Clip – Double (2023)
Avatar: The Way of Water Movie Clip – A Friendship Like No Other (2022)
Top 10 Over the Top Screams in Horror Movies
Rhuigi Villaseñor Made His American Dream Come True